For Josh’s birthday this year, instead of going out we stayed in and I cooked lobster. We mead this recipe last year and it was amazing – it’s from Matthew Kenney’s book “Big City Cooking”. This book is amazing, and has never steered us wrong. I can’t understand why it is out of print, but at least you can still get used copies. It’s not an everyday dinner cookbook, but if you are having folks over for dinner you can basically open to a random page and cook what it tells you and you will win.

So…the menu is lobster with asparagus and blood oranges, with a salad of baby arugula and panko-crusted fried goat cheese. 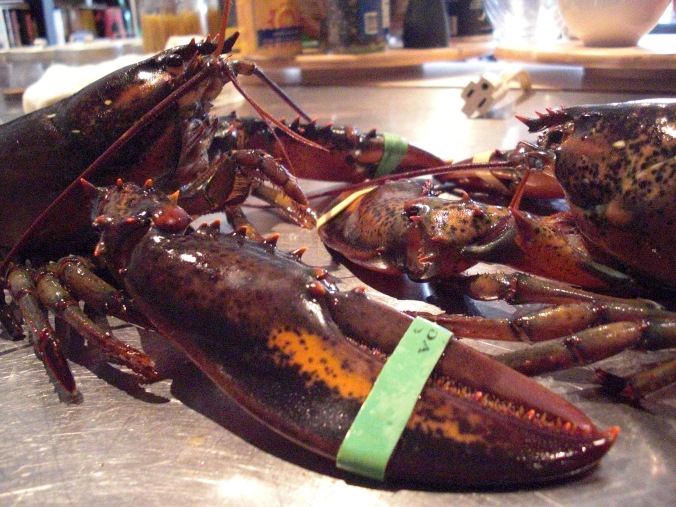 For a luxurious meal, it is quite easy to prepare.

For the salad, you make sure your log of chevre is nice and cold (I stick it in the freezer for a bit, alongside the lobsters.) and slice it into rounds with a piece of dental floss. You dredge the rounds in egg, then panko to coat and put them back in the fridge for a bit.

Put a big pot of water on to boil, and add the bugs. If you put them in the freezer for about 15-20min before cooking, it slows them down enough that they don’t notice when they are put in the water.

Let them cook for about 4 minutes, then plunge into a bowl of cold water. They won’t be fully cooked, but that’s ok.

Now begins the incredibly fun task of taking them apart! Pull off the tail, and make sure any of the liver (it’s a nasty dark green color) doesn’t come with it. Using a kitchen shears, cut through the middle of the underside of the tail. (I don’t have any photos of this part, which would have been useful, but I was covered in lobster goo, and Aretmis can’t use a camera.) Pull out that big chunk of meat. Next, pull the large arms off the body. The head and chest can be discarded – nothing yummy in there. If you’re not grossed out, you can break apart the chest and have a look at the gills, which are pretty cool, but don’t taste good. Pull the large claw apart from the other two leg segments. Pull the small part of the pincer apart from the big one. This can be discarded, too. There is meat in it, but it’s a very small bit compared to the work of getting it out. Crack the large part of the claw (I use a nutcracker) and pull out the meat – it goes all the way down the curve, and you want to make sure you get all of it. Next break up the two little arm segments. When you have all your meat, chop it up into little chunks. When chopping the tail segment, make sure to remove the sinew-y yellow nerv-y thing that runs down the middle.

Meanwhile, put a small pot of water on and steam the asparagus. Heat up a sautee pan with some oil. Pull the goat cheese rounds out of the fridge and fry them on medium heat for about a minute or two per side – enough to crisp the panko but not to melt the cheese. 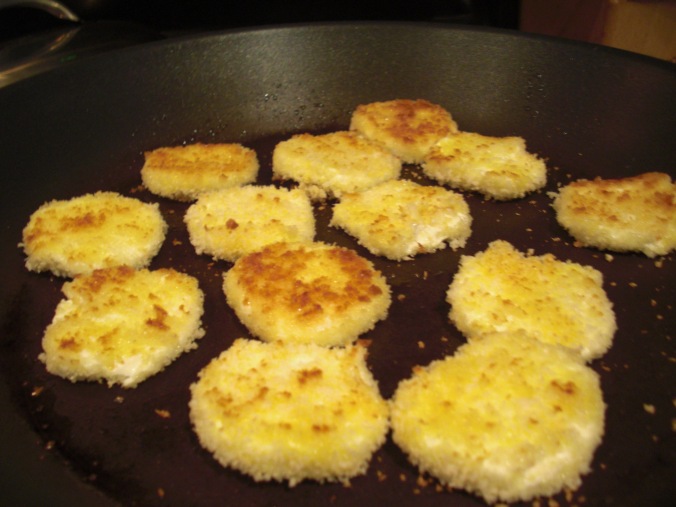 Wipe out the sautee pan and return to heat. Add four tablespoons of butter. When melted, add the lobster and cook for a couple of minutes.

Now comes the fun part. Remove the pan from the heat. Add half cup of Grand Marnier. Strike a match. Light it on fire.

Sautee for another couple of minutes, then put out the fire if it hasn’t burned itself out. Add the asparagus and cook another few minutes.

Toss the arugula with a basic vinigarette and serve with 3-4 cheese rounds. Plate the asparagus and lobster, making sure to get a lot of the sauce. Add blood orange segments around the edge.

While this dish is best with the lobster, I do want to try the sauce (butter and Grand Marnier) with something a bit less expensive and see how it is – shrimp maybe, or monkfish, or even pork. Because, you know, Grand Marnier is so cheap you can cook with it everyday.