Sorry for the lack of posts. Usually sleeping has been more on my mind than blogging when we get home at night.

Monday we just explored the city a bit. Josh and I explored the neighborhood of Sodermalm for a while, then we took one of those cheesy tourist boat tours. It was actually pretty nice – it was a full two hours, and went all around the city. 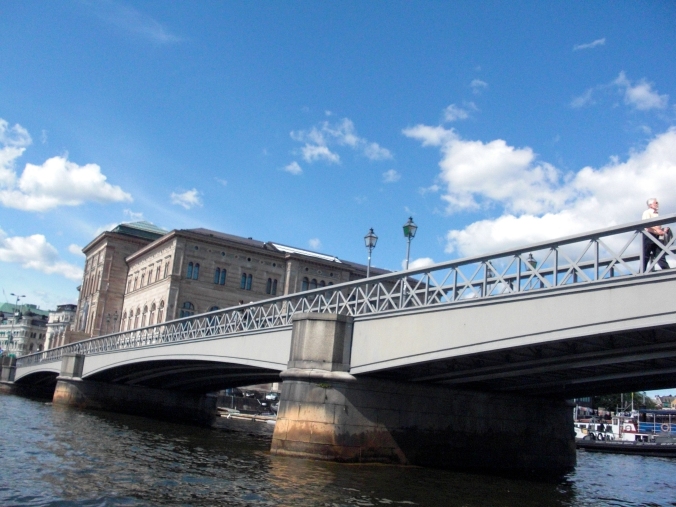 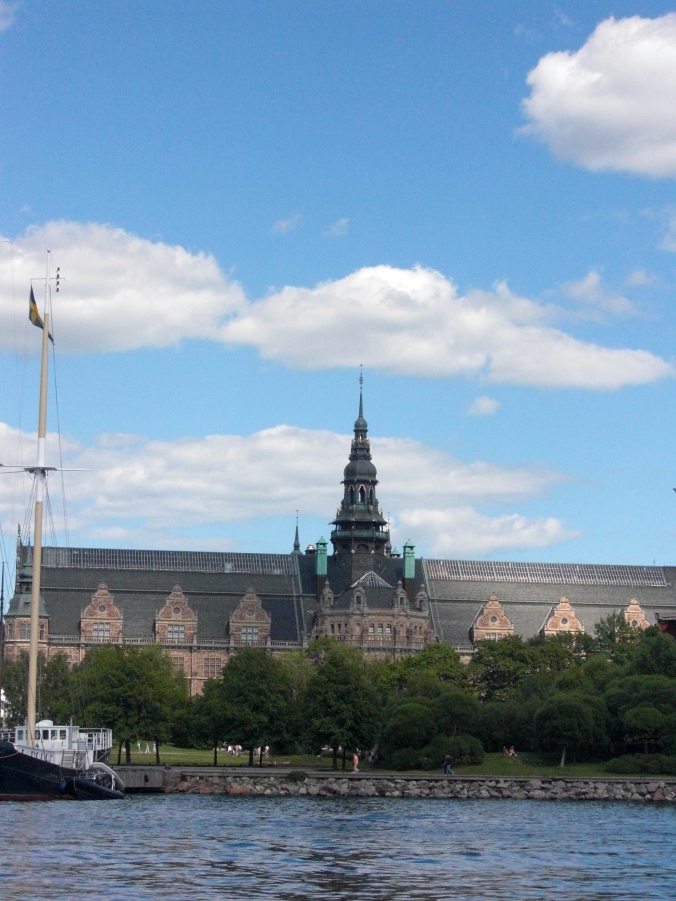 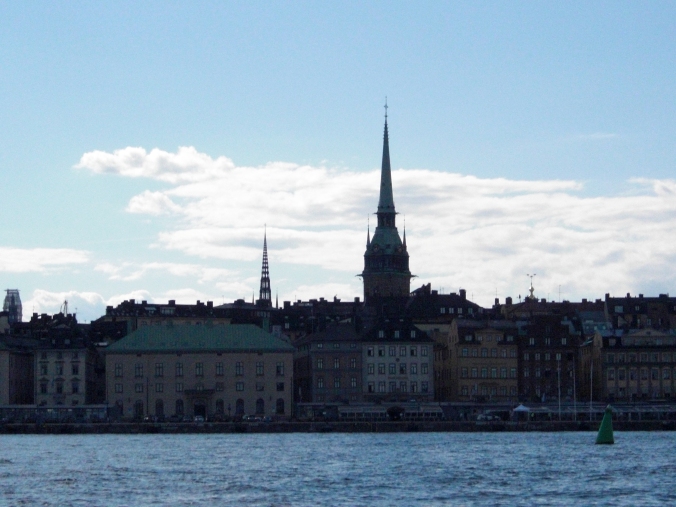 Tuesday (yesterday) Dani joined us and we headed out to the archipelago. The Stockholm Archipelago has something like 30,000 islands. Some of them are large and have towns on them, and some are just a bit of rock and a tree above the water (tho it seems all of them, even the tiniest, have a summer cottage of some sort on them.)

Our first ferry was all old and made of wood and awesome.

We ferried out to Grinda, which was about a two-hour boat ride from the city. We enjoyed a lovely lunch and chatted with a nice Swedish couple (Swedes are very fond of striking up a friendly conversation with you and then telling you how unfriendly their countrymen are.) Josh and I then rented kayaks and hit the water. We paddled part of the way around Grinda and explored some of the smaller rocky islands.

Alas, no photos can be taken from the helm of a sea kayak. (At least not with the cameras we possess.)

Today (Wednesday) Josh, Dani and I hit the Moderna Museet. They had a lovely exhibit about Siri Derkert that was very cool. They also had a great collection of various Picassos, Dalis, Rauschenbergs, Johns, etc.

A goat wearing a tire - must be modern art! (So excited to see this for realz!)

We also visited the Livery Museum, which contains such awesome artifacts as the Masquerade costume King Gustav III was murdered in (complete with bloody shirt and the actual shot they removed from his body) and the stuffed war horse ridden by King Gustavus Adolphus. The horse died in 1633. (The horse outlived the king.) This museum also included several of the magnificent state carriages, which I surreptitiously snapped photos of. 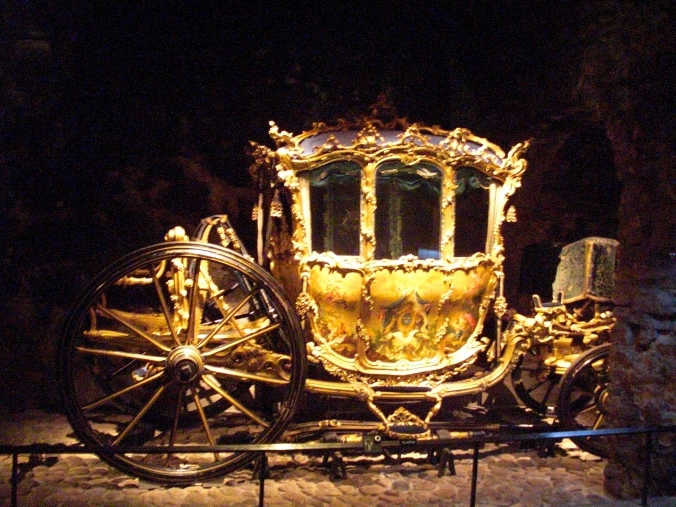 Now we are off to find some Ethopian food. Yay!

Today we went to the Vasa museum. The Vasa was a war ship that King Gustavus Adolphus commissioned. It set sail from Stockholm for it’s maiden voyage in 1628 and promptly sank. Very promptly. I think it made it 1500 meters before the wind capsized the ship because it was too top heavy and didn’t have enough ballast. It lay at the bottom of the harbor for three hundred years before they re-found the wreck and raised it to the surface (intact) in 1961. They then salvaged everything, restored the ship, and built a museum around it.

All of this sounds pretty neat. But none of it really can possibly describe how amazing this thing is. Seriously. You walk in the door and are just struck dumb. Photos can’t really do it justice, but I’ll try. You just have to go see it for yourself. 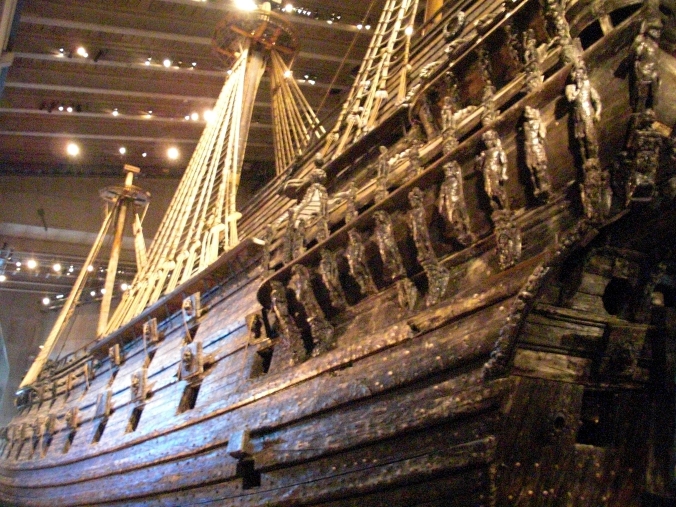 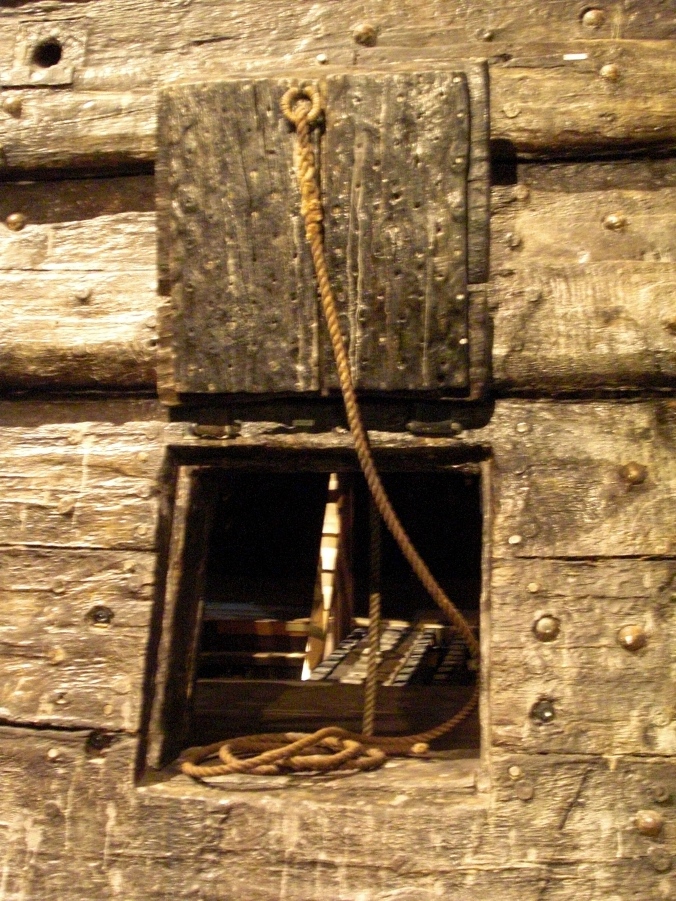 Today we headed into Gamla Stan, which is the oldest part of Stockholm. It is full of fabulous old buildings and beautiful little passages and crooked streets. 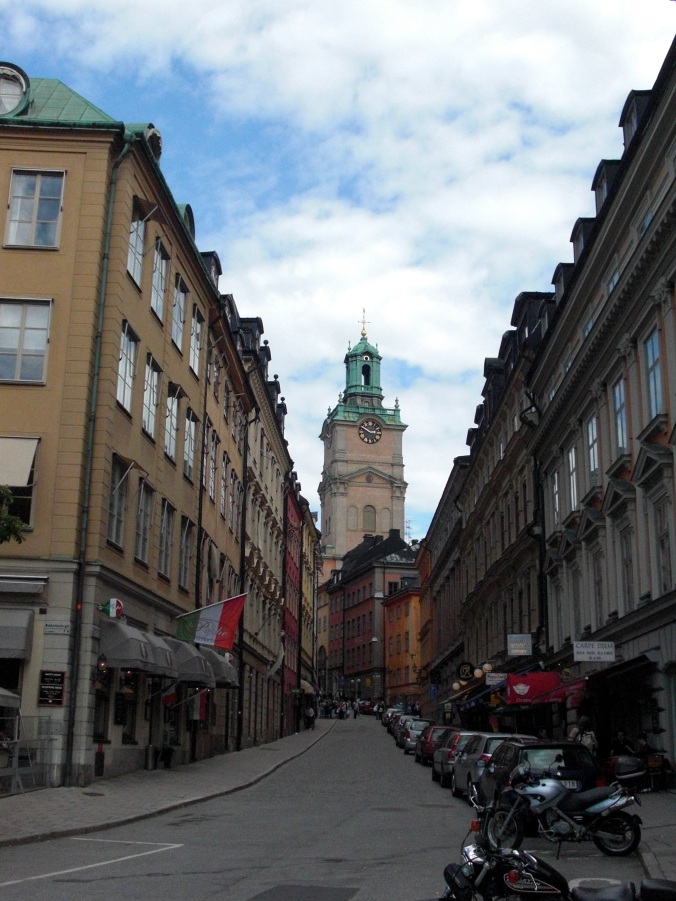 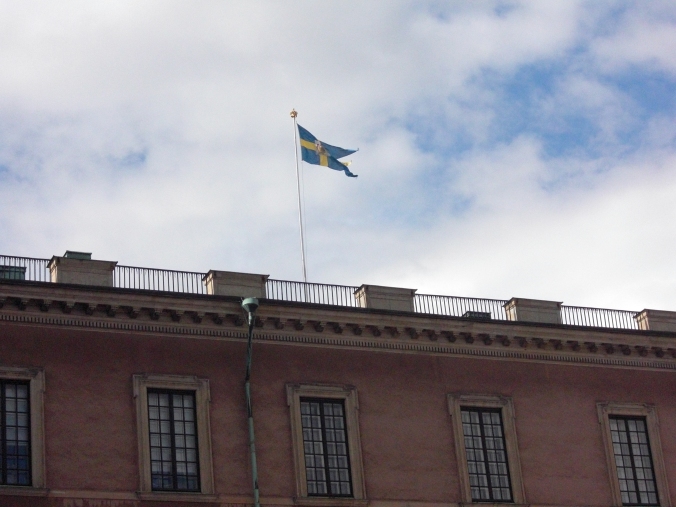 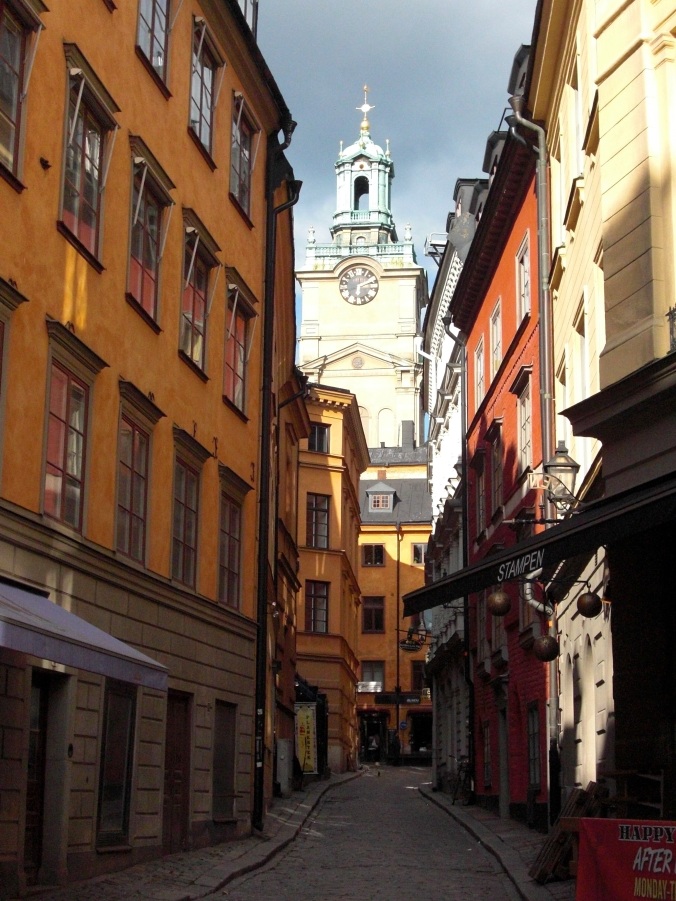 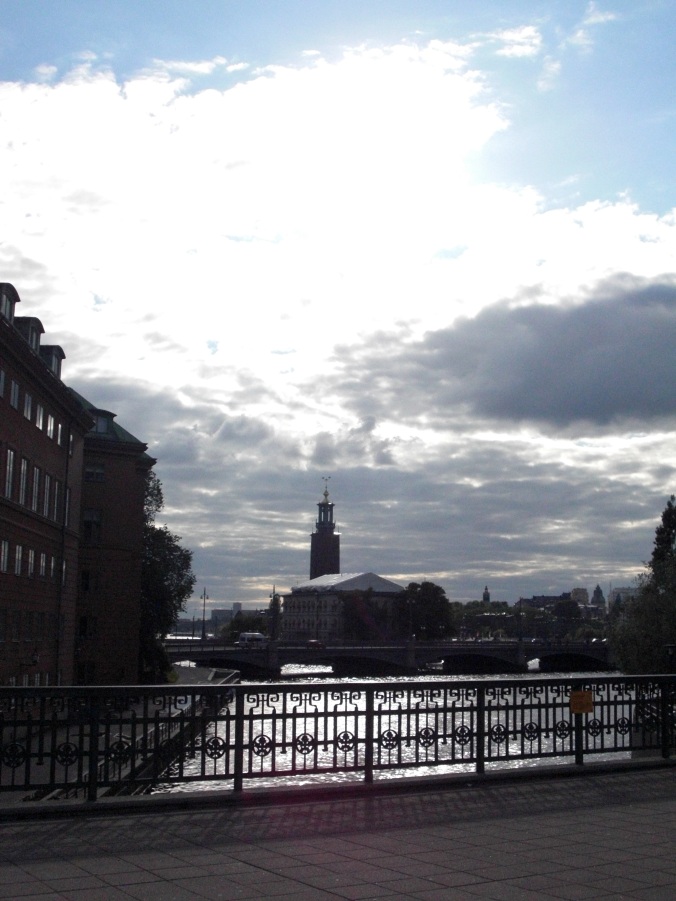 One of the coolest things we saw was the statue of St. George and the Dragon in the cathedral. 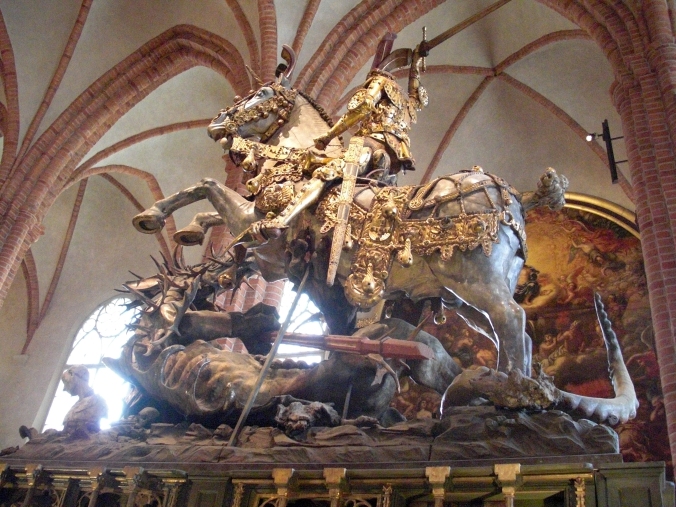 We are having a great time with great friends. Yay! 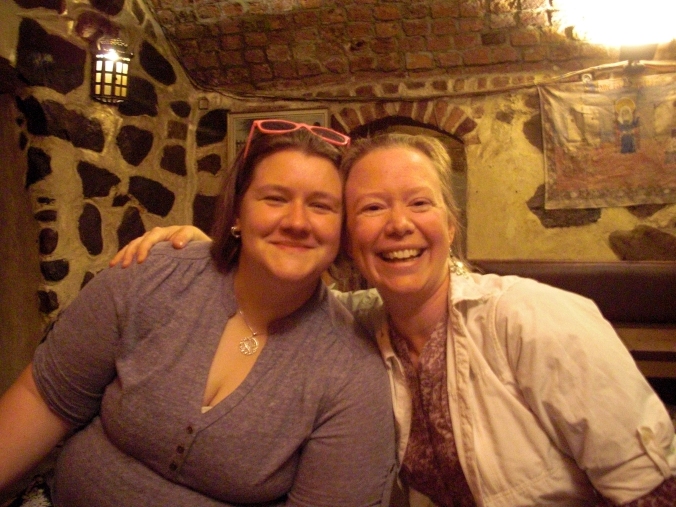 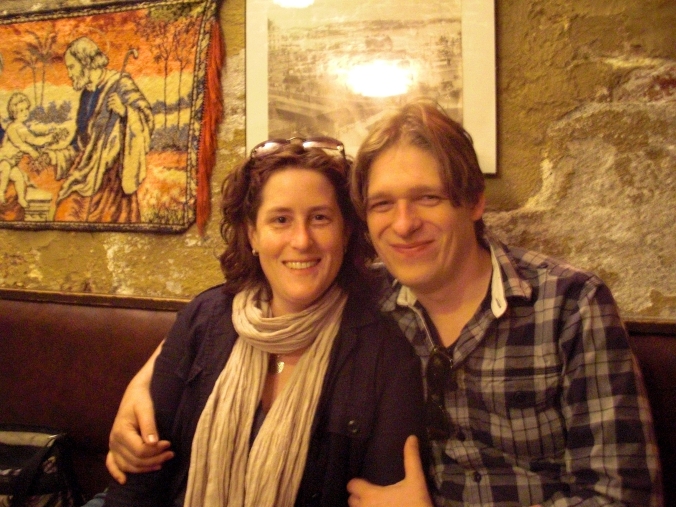 Today we traveled north of Stockholm to visit the burial mounds in Gamla Uppsala.  We also visited the little church near the mounds and the cathedral in Uppsala. 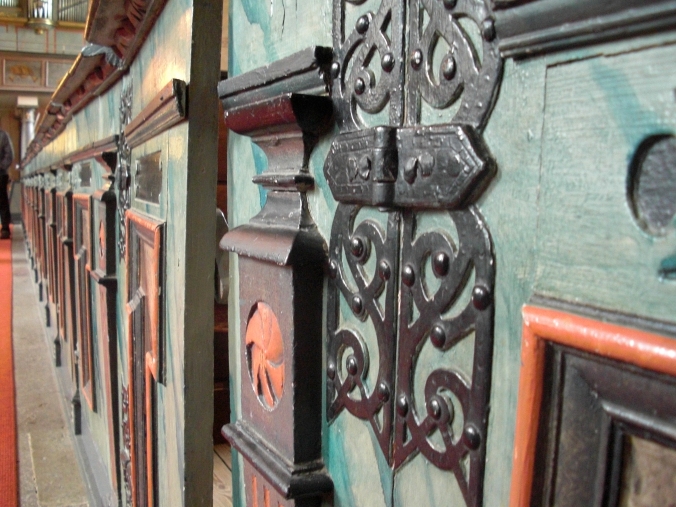 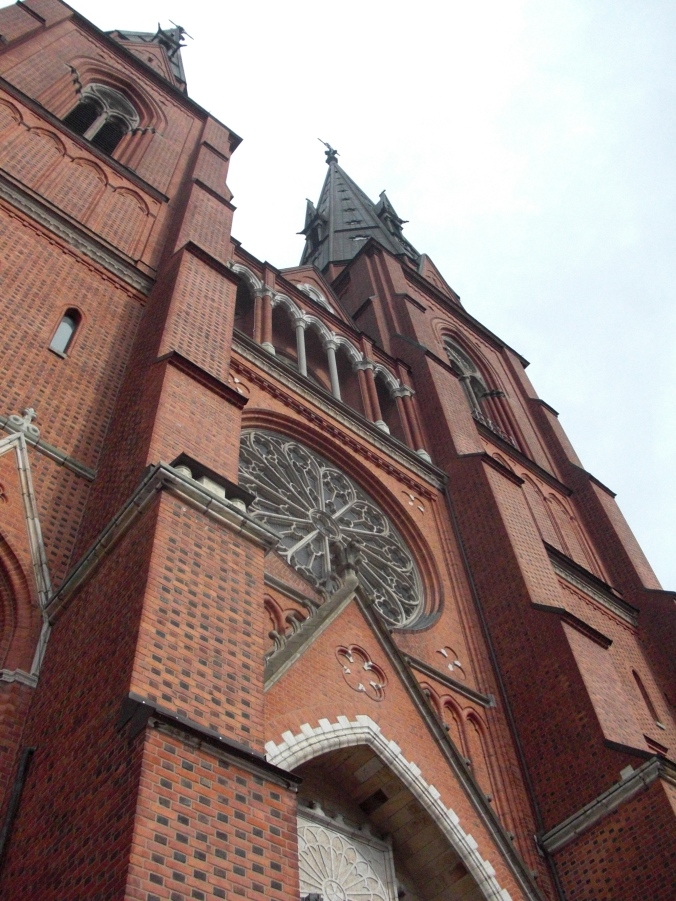 ...but who cares that the church is closed as long as we could see the rune stones

Last night, we did explore Helsingborg a bit more. We keep using the word “quaint” to describe everything in this country. 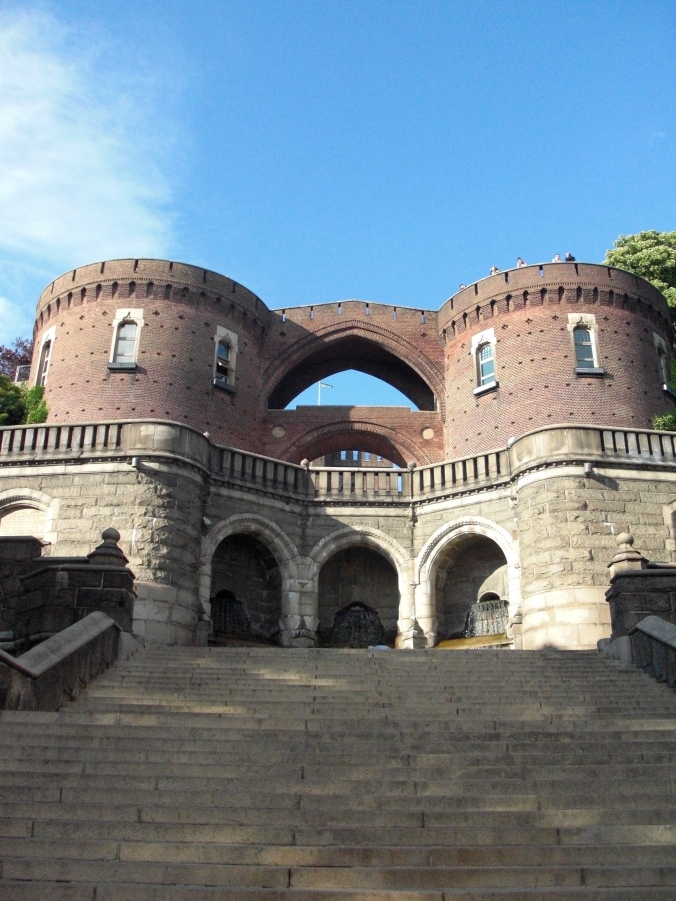 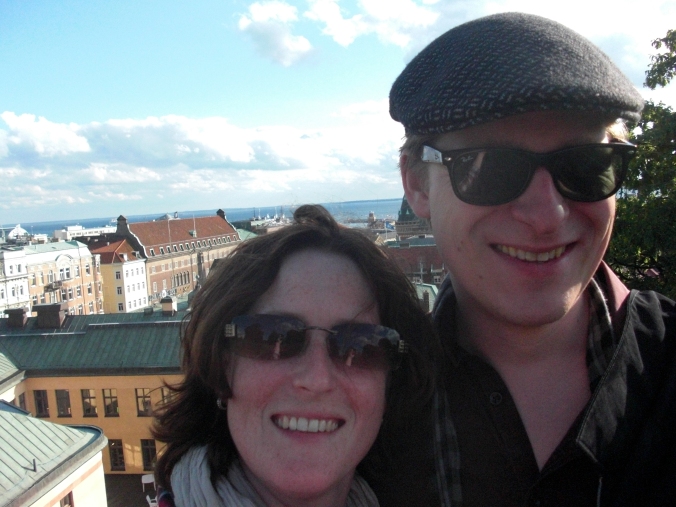 This morning we got up after a good night’s sleep (can’t blame jet lag any more) and hit the road for Stockholm, a six hour drive. We stopped in Jonkoping, at the southern tip of Lake Vattern, for lunch. We also stopped in Norrkoping, which is a charming (quaint, even) little industrial town that has transformed all of the former textile factories along the river into an awesome assemblage of museums, cafes, and boardwalks connecting it all.

We continued on into Stockholm, where we battled rush-hour traffic and poorly-routed GPS (there are two Oskarsvagens in Stockholm, apparently.) But, we persevered, and arrived at the home of Dani and Jaime, where we found wine, reindeer sausage, Scotch, yummy cheese, friendly kitties and friendly faces. We are settling in for an evening of catching up, and will attack the city first thing tomorrow.

I took this photo at 10pm last night.  Natural light.

This morning we got up early (stupid jet lag) and hit the road again.  First we visited Ales Stenar, which is a Viking age stone circle on the southern tip of the coast.  It was pretty cool.  (See my Solstice post for pics.)  Getting up early did serve us well, as we were the only people there but as we left the traffic was definitely starting to build up.

We headed back west to the town of Helsingborg, which is just north of Malmo.  We checked into our hotel, then caught the ferry across the straight to Denmark.  It’s the point where Denmark and Sweden are the closest, only 4km apart.  We were headed for Kronborg Castle, otherwise known as Hamlet’s Elsinore. 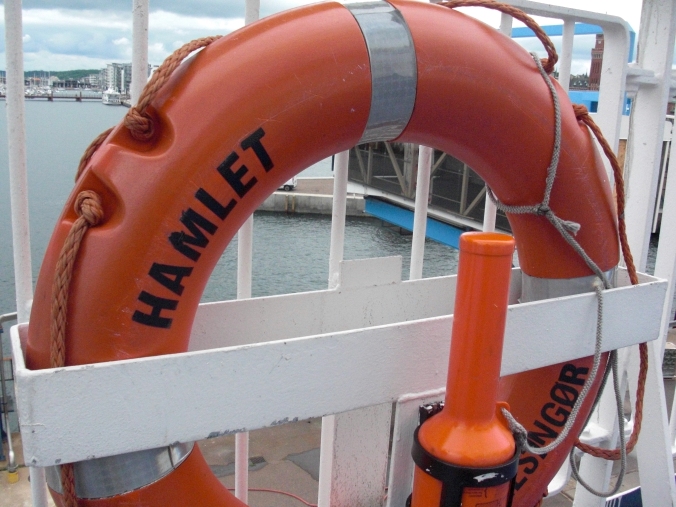 Guess what our boat was called. 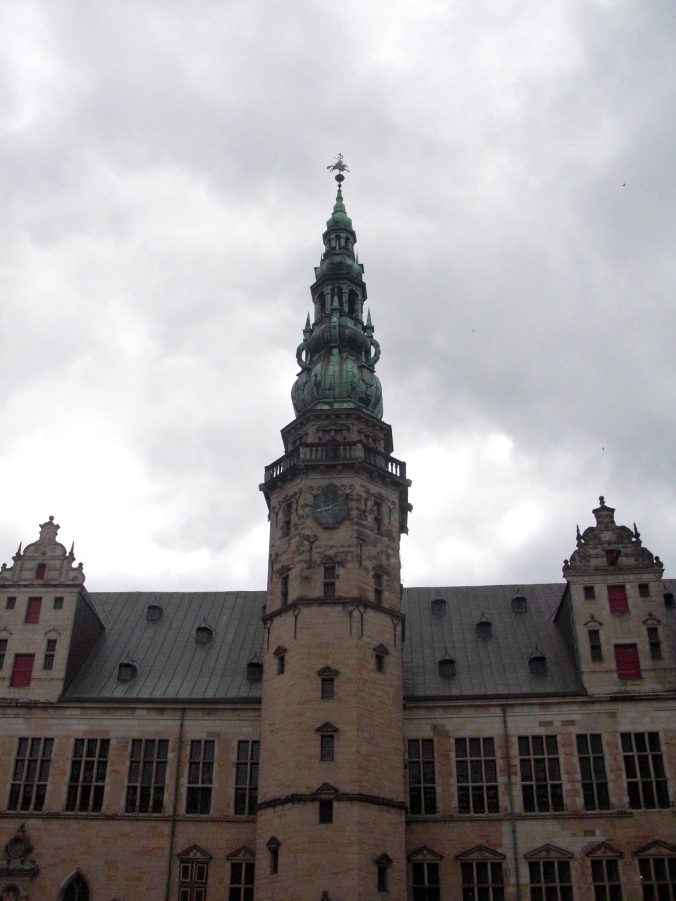 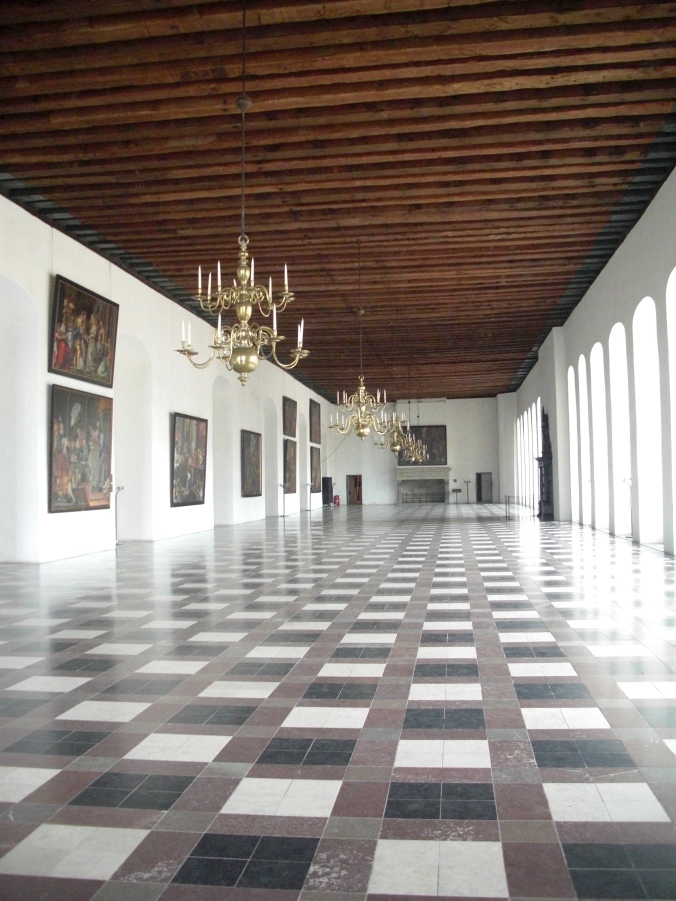 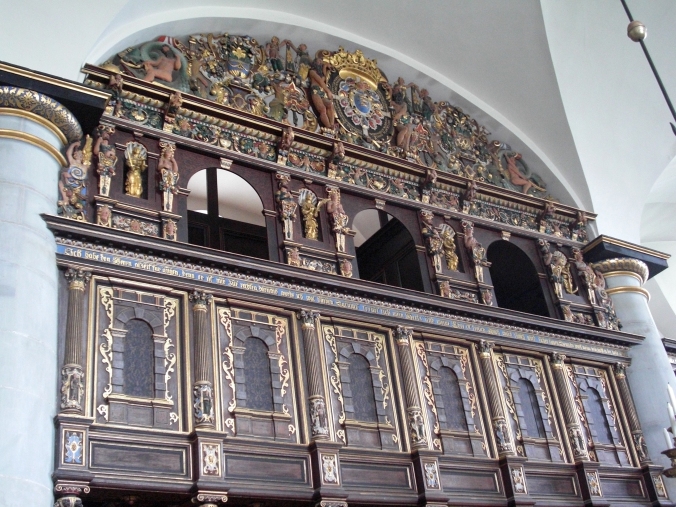 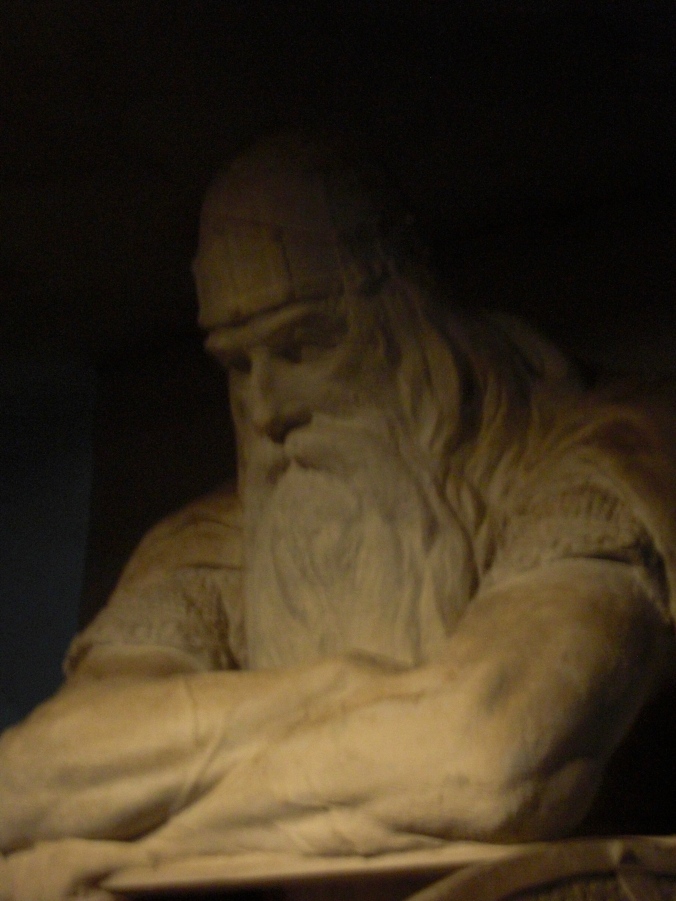 Apparently this guy will rise again if Denmark is ever threatened. Just like the South.

Also, there was a duty-free shop. On the boat. Because technically we left the country. As soon as you hit the halfway point of the crossing, it opened/closed, depending on what direction you were going. Awesome. 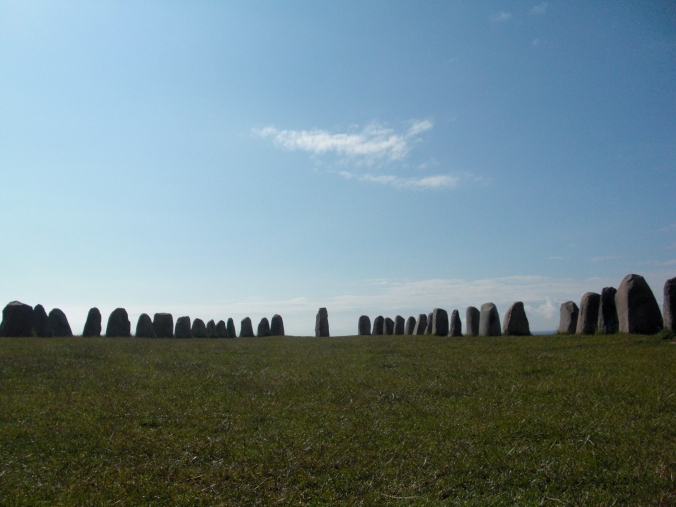 We met our driver again early this morning and were taken to the Volvo factory, where we went through the paperwork and then received our car. 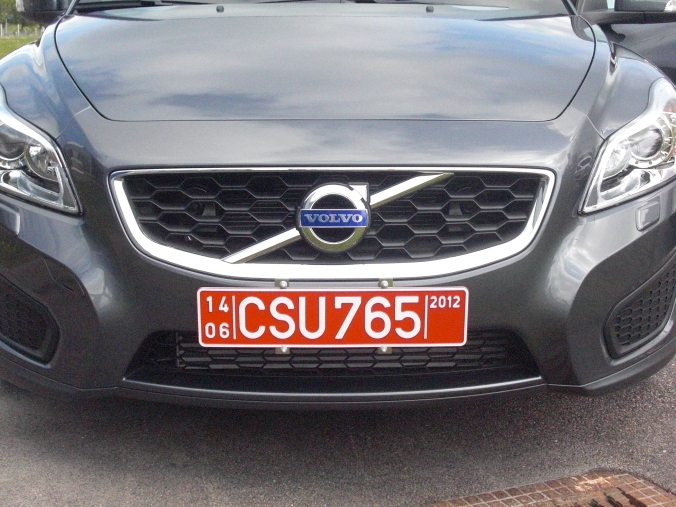 We got to take a factory tour, which was pretty awesome. (Sorry, no photos allowed.) Our tour guide had a very heavy Chinese accent, so he kept talking about the “rowboats” welding the “loof.” It was very cool to see the full assembly line in process, and all the parts coming together.

After lunch we hit the road. Our plan was to head to Ystad, which is on the southern tip of Sweden. There is a super-cool Stonehenge-type place just outside the town, which we will see first thing in the morning before we head back to Helsingborg.

Ystad is a perfect little picturesque town – all timbered houses and cobbled streets and people riding Dutch bikes everywhere. We had dinner and are next heading to the alehouse/brewpub next to our hotel. 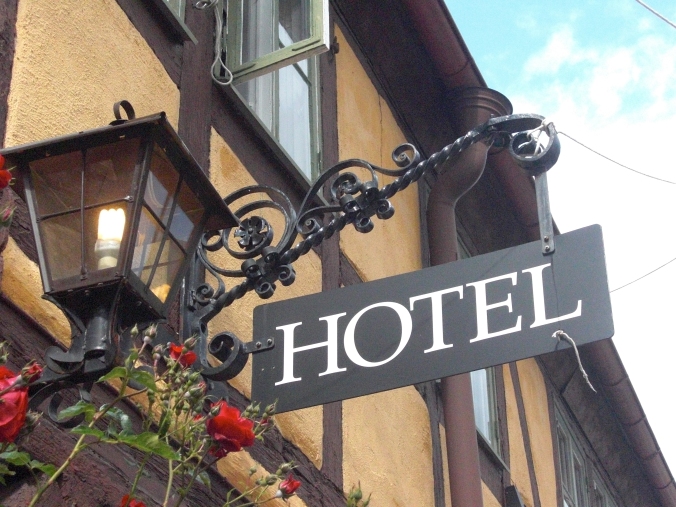 Today we will celebrate 3 years of marriage by touring the Volvo factory and picking up our new car.  Yay!

Here are some shots of Goteborg:

Ships in the harbor

Something you would never see at an American museum 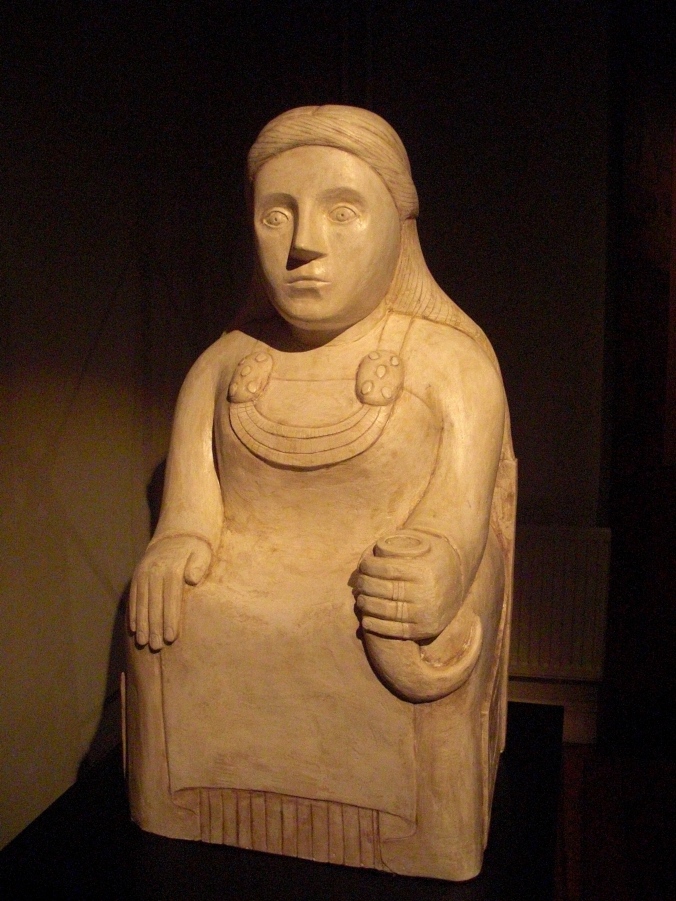 This one's for you, Rachel.

Again with the canal

Down is always easier

We had breakfast, and arrived at the Goteborg Stadsmuseum before they opened at 10.  We mainly went there to see their Viking artifacts – they have the remains of one of the only actual viking longships ever found.  There was also quite an extensive exhibit about the history of Goteborg.  The museum was a little odd – some of the displays had Swedish and English, but some only Swedish.  There was an exhibit about “10,000 years of human history” that had some cool artifacts, but the text accompanying them was frustrating – it kept asking questions instead of telling you about the artifact.  “In the past graves included pottery, but now they included iron nails.  Why do you think this is?”  I don’t know.  You’re the friggin’ museum.  You’re supposed to tell me!

The Viking ship was cool, but the exhibit surrounding it was rather random.  Some Viking artifacts, and some random statues of Odin, Freya, etc, which looked interesting but had no information about who carved them or when (definitely not as old as the ship.)

There were lots of placards with information, but again it was all very random – some about the ship specifically, some about Viking life and society, and some various quotes from the Eddas and some Muslim scholar who travelled through the “northlands” in 900 AD thrown in for good measure.

We ate a quick lunch, and decided to rent bikes to explore the city.  But the damn “chip and pin” credit card system in Sweden foiled us, as the machine wouldn’t take our cards.  Back to the hotel, where a quick regrouping became naptime.  (Yay, jetlag!)

Now we have begun our mission to find somewhere for dinner, which on a Sunday is apparently as hard as finding something open in downtown St. Paul after 5pm.

Later:  We wandered around the Haga neighborhood, and ate dinner at a place called Hemma Hos, which was a lovely little small-plate restaurant.  Josh had a Portlandia moment when he asked the waiter if the moose we ate was farmed or wild.  The waiter misunderstood and told us that they have a lot of moose up north in Sweden.  We said “So do we, we’re from Minnesota.”  The waiter said “Ahh…Minnesota Wild!”

Soon we will be off to bed, or attempt to, because the Volvo folks are picking us up bright and early to take us to the factory to pick up the car.  Woo-hoo!

1.  Irish Pubs are Universal.  No matter where you travel, you will be able to find an Irish pub where the beer is familiar and the language is English.

2.  The Swedish are even more determined than Minnesotans to enjoy the limited warm weather they receive.  Every restaurant patio I have seen has little fleece blankets draped over the chairs, so people can still sit outside despite the 50 degree temps.

3.  Sweden is just like Minnesota, at least musically.  Pretty much every place we have walked into during the past two days has played at least one song we have heard on The Current recently.  Also, if you want to look trendy in Sweden, wear Chuck Taylors.  And skinny jeans.  And a plaid shirt.  Like I said, just like Minnesota.

(apologies for the lack of photos.  The internet is dismally slow at this hotel.  Hopefully more to come in the future.)

The Internal Ledger
Blog at WordPress.com.